The book In Defense of the Fatherless was released earlier this year by Sarah Brinton and Amanda Bennett. It is important, articulate, and well worth wrestling with.

Even beyond all the details and arguments it presents – which I know will draw a wide range of both affirmations and thoughtful counter-points from those who read it – In Defense of the Fatherless stands as a compelling emblem of the maturing of the Christian orphan care movement. It testifies to a movement that is not only growing wider but also deeper.

There was a time not long ago when much of the public talk within the movement could be broadly classified as “cheerleading.” It championed the importance of caring for orphaned and vulnerable children, and highlighted the beauty seen when lives were changed as a result.

This was not all bad, to be sure. Nor was it untrue. But it only told part of the truth. Often, the complex questions and never-quite-resolvable dilemmas and less-than-hoped-for results were left unmentioned. But these things are an essential part of the truth, too. They will eventually be encountered by all who dare to come close to the world at its most broken. So any advocate or organization or movement that fails to engage these things with candor will soon crumble – yielding to cynicism, despair or apathy as we discover how hard it all really can be.

Thankfully, many today are choosing to run into rather than away from these hard topics, giving expression to many of the difficult things often neglected in the past. Advocates and leaders are speaking of the complete picture: both the beauty and the ache, the “success stories” and the deep disappointments, the innovative solutions and good intentions gone awry.

In Defense of the Fatherless points vividly in this direction. Best of all, it seeks not only to raise questions, but to press beyond critique toward ideas and recommendations. It offers thoughtful reflections on ways to correct excesses of the past, avoid pitfalls, and infuse greater wisdom into our love. 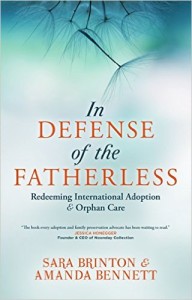 In Defense of the Fatherless also tackles some issues that rarely touched by anyone. I was deeply impressed with how Brinton and Bennett boldly challenge the tendency of many aid and development programs to presume (without ever saying so) that broken communities can be repaired without men being part of the solution. This tendency is as strong as it is understandable, for it is so often the women who continue to work, aid their neighbors and nurture children, even when most of the men have given up. But, as Brinton and Bennett articulate well, men play a big role in most of the problems and thus must also play a big role in solutions. Any “fix” to the challenges of orphans and widows that does not directly address the responsibilities and character of men will be partial at best.

To be sure, many wise and experienced leaders who’ve spent years in the trenches of orphan care will disagree with some of book’s claims and conclusions. But I suspect that is part of Brinton and Bennett’s goal: to spur continued refining of the way we think and act in efforts to aid vulnerable children.

I certainly won’t be able to explore each argument made in the book, but here are a few – including some of the affirmations and caveats likely to come from those who’ve served long and faithfully in this work:

Contention: Many Christian efforts to aid the needy, including orphans, have ultimately proved unhelpful or even counter-productive. (Introduction and throughout book)

Vital Affirmation: It is utterly essential that Christians grasp that good intentions are simply not enough. Engaging deep need is always very complex, and simplistic solutions – both faith-based and secular – far too often bring little good…and can even do great harm.

Important Caveat: Even as we’re aware of this reality, we can’t let fear of mistakes paralyze us. We must think, study, learn, prepare and plan before acting – but we can’t merely “leave compassion to the professionals” and limit our engagement to Golf Fundraisers and Facebook advocacy. We are also called to love our neighbor with our hearts, homes and hands…even when it is complex and difficult.

Contention: Orphanages are never a good solution for children. (Chapters 2 and 7)

Vital Affirmation: Both Scripture and social science confirm that God designed the family as the very best place for children to grow. Far too often, people have turned to orphanages as a mass-scale solution for the mass-scale problem of orphans. Institutions may meet physical needs on a mass scale, but rarely meet fully the far deeper need for love, nurture and belonging. Care within families should always be the priority whenever possible.

Important Caveat: In many parts of the world, orphanages still provide a vital alternative to life on the streets or in abusive homes. It’s also necessary to recognize the essential role therapeutic group settings can play in the healing of children with intensive needs.  Even as we press hard toward the ideal of permanent family, we can also honor the devoted care and protection provided by many quality residential facilities, and also work to help them improve their quality of care.

Contention: International adoption is rife with unethical practices and must be “redeemed” if it is to serve children and families well. (Chapters 4 and 9)

Vital Affirmation: In many developing countries, virtually every “system” is simply broken. Meanwhile, corruption can taint everything, from construction contracts to traffic tickets.   Any effort to bring good in these places – from philanthropic work to major infrastructure projects to adoption – inevitably butts up against this reality, struggling both against and within flawed systems. Equally important to recognize, the presence of Western resources – even when necessary – can bend things in its direction in unhealthy ways. Money can give rise to shady middlemen, incentivize corruption, and even cause parents to make terrible decisions for their children. These hazards must be taken with utmost seriousness in all aspects of child welfare, including adoption. Adoption advocates should be the first to champion the checks and balances needed to minimize risks in adoption processes and to call out unethical behavior whenever it is encountered.

Important Caveat: There are actually two dangers at play here, not just one: the very real potential for serious ethical violations in adoption processes and the ethical violations that inevitably occur when children who need families remain un-adopted because of restrictive policies. These children are at dramatically increased risk of virtually every known evil, from disease and malnutrition to human trafficking and sexual exploitation. For children who face these dangers, every day counts. So standing between these children and families willing to embrace them – even in the name of preventing unethical adoption practices – is an action heavy with ethical consequences also.   Ultimately, those who recognize that children need families must have a clear-eyed view of the situation we face. It is not the privileged position of the doctor in the state-of-the-art research hospital, who draws upon the finest medical tools, limitless resources, instant knowledge, and perfected systems.   Rather, it is much more like that of the army medic serving with a platoon near the front lines, trying to care for shattered limbs using only the contents of his backpack, under fire and in far-from-sterile conditions.   What might have been shunned in the pristine hospital may truly be a best-case-scenario in such places.  Ultimately, those who care deeply about children must champion both vital safeguards against risks of corruption in adoption and also effective, timely adoption processes that provide family for children who badly need it.

Contention: Children end up without families primarily because of financial poverty. (Chapter 10)

Vital Affirmation: Financial poverty is a major factor in separating children from their parents, and is often at the root of abandonment, relinquishment, death to preventable diseases and other causes of separation. The Christian’s first concern in all such cases should be not merely to “care for children” but to help surviving parents – often a widow – to care for their children if at all possible.   It’s also important to recognize that the very presence of an orphanage can even create a “pull effect,” drawing children from poor-but-loving families in search of education, food or other resources that the family is not able to provide at home.

Important Caveat: Financial poverty is often only the tip of the iceberg when it comes to the dilemmas associated with “poverty.”   So the assumption that “just a little money” or support will cause broken families to thrive is often shattered by reality.   I recall a conversation with the leader of a program working to reintegrate children from orphanages into their biological families in El Salvador. I asked him what percentage of the families they were working to reintegrate could be safely brought back together with financial help alone. “Zero,” he said without blinking, and then went on to share story after story of physical and sexual abuse, exploitation by parents and relatives, and other vexing dilemmas. The causes of family breakdown vary notably by region of the world. But very often material poverty is only one factor among many, which range from addictions and disease to things like a new step father who doesn’t want an ex-husband’s children in the house. Sometimes these issues are overcome-able with outside support; sometimes they are not, as is often painfully clear even in countries with relatively well-developed safety nets like the U.S.

Contention: Short-term missions (STM) trips are often wasteful and ineffective at best, and frequently do more harm than good. (Chapter 3)

Vital Affirmation: The simply truth is that “missions” trips are far too often merely a chance to peer into the windows of poverty, ultimately producing little lasting change in anyone. High-maintenance visitors can be a big distraction to long-term missionaries and projects, while accomplishing only a fraction of what could have been funded with their travel costs. Furthermore, these trips can perpetuate harmful attitudes and patterns on all sides, leaving everyone worse off in the end.

Important Caveat: As the book acknowledges, much good can come of short-term missions done wisely.   It is quite telling that the long-term missionary to Ghana quoted as giving scathing critiques of short-term missions, actually first became passionate about Ghana on a short-term missions trip there. The same is true of Brinton and Bennett themselves, who both acknowledge the role of missions trips in waking their hearts for these issues. Yes, STMs are rife with pitfalls…and many such trips should be either entirely re-thought or scrapped. But they also can be a powerful catalyst for heart change, new life purpose, mutually-beneficial international relationships and more.

In all of this and much more, In Defense of the Fatherless spotlights many of the most important questions facing orphan advocates. Even better, it not only raises questions and critiques, but also offers many thoughtful proposals on to how engage the questions wisely and well.

Sarah Brinton and Amanda Bennett deserve not only commendation for their important work, but also sincere thanks from all of us who desire to see the Christian orphan care movement continue to grow not only broader, but also more wise, well-informed and effective in all of its many expressions.

Want a Glimpse through the Eyes of an Orphan?

How an Ugly Sweater Saved Me