Last week, the cover of a magazine jumped at me from an airport news stand.  It was an attack on anti-human trafficking advocates.  What?  I nearly rubbed my eyes.  That’s like attacking Captain America or Buzz Lightyear.   But reading the attack gave me much to ponder, and I couldn’t help sketching out those reflections in a article of response.  Comment Magazine is running it this week as “The Super Bowl and ‘the Supersex Myth.”  You can read part of it below. 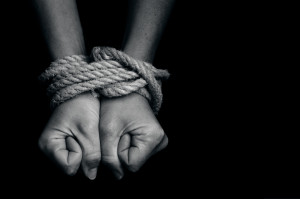 THE SUPER BOWL AND THE “SUPERSEX MYTH”

With Super Bowl 50 hoopla enveloping California’s central coast, the region’s Silicon Valley Metro ran a cover-article exposé attacking what it labels “The Supersex Myth.” Just what does this exposé expose? Purportedly, much of the concern about human trafficking in North America is little more than hype, especially the alleged ties between major sporting events and sex for hire. The article’s subtitle on the cover of the magazine sneers, “Trafficked, underaged girls are flooding into Silicon Valley for the Big Game. Yeah, Right.”

Believe it or not, there are several lessons that advocates for justice issues—from trafficking to orphans and foster youth to poverty—can learn from this cynical and snark-filled critique.

First, justice advocates must always begin by listening, learning, and improving how we engage the issues we care about.

The simple truth is that anything that involves deep human needs is painfully complex. Even the best “solutions” will be partial, and will sometimes even cause harm despite the best intentions. Yet it is easy for passionate people to miss where we might be off track. The justice of our cause can easily blind us to folly in our tactics.

So when critics come after us, we need to start with listening, not self-defense. Yes, the critics are likely wrong on many points. But they’re likely right about some things too. By hearing them out, asking further questions, and engaging self-critique, we’ll undoubtedly see things we’ve missed—things we need to see.

For example, those of us who care deeply about human trafficking need to watch our advocacy language and statistics carefully. The article describes how “at the 2006 World Cup in Germany, human rights organizations estimated that 40,000 prostitutes would flock to the event. By the 2010 Super Bowl in Miami, the number stayed the same, except it was no longer voluntary prostitutes, but captive women and children.” Yet it appears that both of these claims were, at best, highly conjectural. In fact, a forthcoming Stanford study finds virtually no discernable increase in prostitution, let alone sex trafficking, around Super Bowls or other major sporting events.

Inflated numbers and language breeds cynicism and make us vulnerable to claims of overselling problems. Worse yet, they obscure the real-but-less-dramatic issues at stake.

Certainly, there is a time to push back against misguided attacks. But we must always start with listening and learning first, even to biting critique.

Second, justice advocates must know that criticism will hit any work, no matter how good.

What could be less controversial than fighting human trafficking? In a world thick with moral fog, trafficking may be the only thing left that virtually everyone is still willing to label “evil.” Little wonder that California’s immensely popular anti-trafficking Proposition 35 was the most widely supported ballot initiative in state history, garnering 81.6 percent of the vote.

But even here, criticism comes. The Metro article mocks how vast funds and effort are poured into anti-trafficking efforts, often with puny verifiable results. It describes the massive campaign unleashed before the 2012 Super Bowl in Indianapolis, which included training 3,400 people to spot signs of trafficking and placing 40,000 bars of soap emblazoned with a trafficking hotline in hotels across the city. In the end, just two arrests that week qualified as trafficking-related incidents.

Critics seize on statistics like these to claim that anti-trafficking crusades do more for the people promoting them than for any supposed victims. They cynically assume that most advocates are driven by desire for personal identity and public branding as “champions of justice” and “modern-day abolitionists.” They also see only self-interest when nonprofits and governments use anti-trafficking campaigns to raise funds. “Cha-ching. It’s money. It’s all about more money, more manpower,” concludes one critic interviewed in the article. “And that’s what it’s all about. This big issue is a boondoggle.”

Any effort to address deep human need will draw similar criticisms. Cynics will seize on the errors and less-than-hoped-for results that inevitably come with any effort to bring mercy and justice. They will demonstrate that descriptions of the problem are overblown, that advocates have mixed motives, that proposed solutions might be making things worse. And these critics will almost certainly be at least partially right! (Which is why we need to start with listening.)

But some of the critique will also be deeply misguided. Critics themselves also have blind spots. They can be driven by past hurts, misled by their own cynicism, and quick to impute their own motives to others. So the imperative of listening and self-critique must be counterweighted with wisdom described well by Teddy Roosevelt: “It is not the critic who counts. . . . The credit belongs to the [one] who is actually in the arena, whose face is marred by dust and sweat and blood; who strives valiantly; who errs, who comes short again and again, because there is no effort without error and shortcoming.”

Third, justice advocates must attend to the small and subtle over the sensational…

Read the final section of the article on the Comment Magazine website: “The Super Bowl and the Supersex Myth.”

How Potluck Dinners Can Make Us Better Foster Care Advocates