Giving by Christians to care for orphaned and vulnerable children has grown significantly since 2010 – rising much faster than charitable giving overall.

Recently-released data shows last year was no exception. Charitable giving by all Americans grew by a strong 4.1 percent in 2015. But the new ECFA “State of Giving Report” (reporting on 2015 data) reveals that in the same period, support for Christian orphan care grew at more than three times that rate, rising 12.4 percent.

Christian giving to support adoption grew significantly as well, rising 8.4 percent over the prior year. Other investments in vulnerable children, including child sponsorships and children’s homes, also saw strong growth, at 7 percent and 9.8 percent growth respectively.

Over the past half decade, the consistent rise in Christian giving to serve orphaned and vulnerable children has been dramatic. Since 2010, charitable giving by Americans – who give away the largest portion of their income of any Western nation – rose by nearly 27 percent. That’s a significant rise. But in that same period, giving to Christian orphan care rose by more than 87 percent and to adoption by over 73 percent. 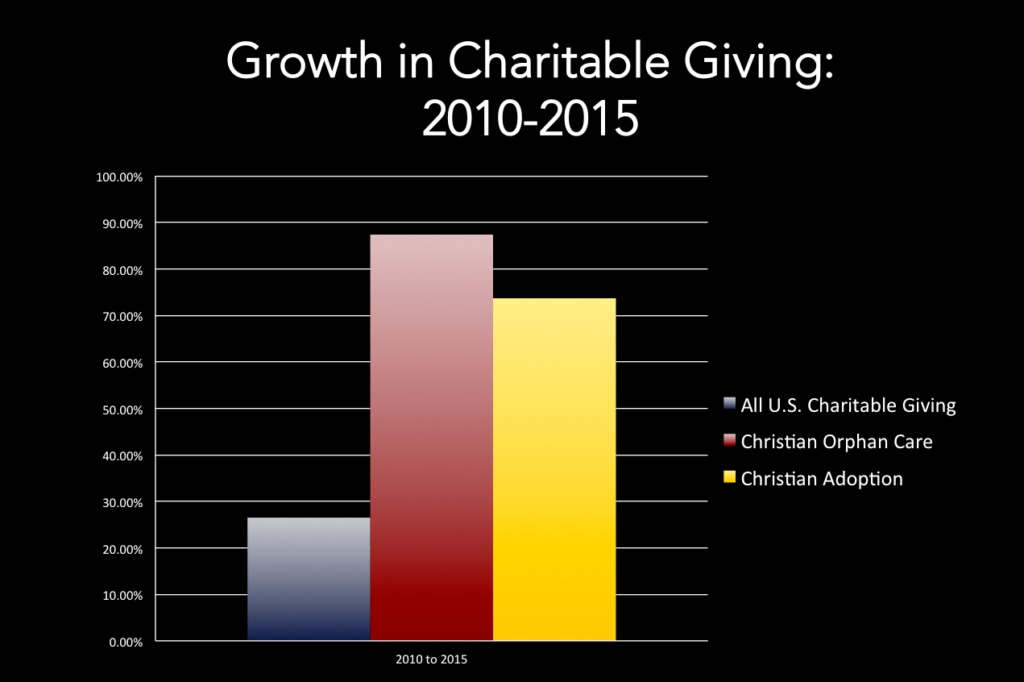 All this stands as just one more vivid marker of a growing movement. Across the U.S. – and increasingly around the world – Christians are indeed re-earning their historic reputation as a people deeply committed to children who lack the protection and care of family.

A decade ago, this resurgence focused primarily on inter-country adoption. Steadily, it has grown to encompass a broad range of other ways to live out James 1:27 as well: from in-country orphan care, local/indigenous adoption, and family preservation and reunification programs, to U.S. foster care, foster-to-adopt, mentoring and much more.

Certainly, our goal should always be to increase not just support for good work, but the effectiveness of that work as well.  But I see that steadily happening also.  As is evident through efforts like the Applied Research and Best Practice Initiative, Christian commitment to orphaned and vulnerable children is growing both broader and deeper.

May this work – and especially the good fruit it produces in the lives of children and families – only continue to grow over the years to come.

How to Rule Your Technology (So It Won't Rule You)

Roberta Tonn: Hospitality for Baby Lambs and for a Kid Down the Road