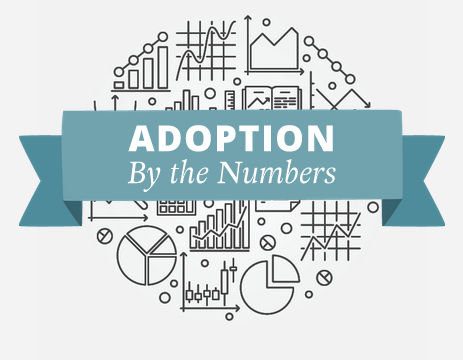 The National Council for Adoption (NCFA) has released their 2017 Adoption: By the Numbers report. You can read the report HERE.

Overall, the numbers suggest a continued conflict between the willingness of many families to adopt children and several factors that constrict the number of children who can be adopted.

Within the US, adoption continues to be chosen much less frequently than abortion in unplanned pregnancies. Globally, many countries with large numbers of orphaned children continue to restrict international adoption. As a result, both private domestic adoption and international adoption numbers have seen long-term downward trends.   A notable exception, however, are adoptions from foster care, which have begun to rise modestly over the past five years.

Data of particular note in the report includes:

Many factors beyond law and policies affect these trends. However, wise government policies can indeed enable more children to find loving families through adoption. (It is worth noting that the Adoption and Safe Families Act of 1997 doubled the number of children adopted from foster care within a handful of years.)

Policies that help ensure that women facing unplanned pregnancies are fully informed and well-supported in all their options could likely increase infant adoptions in the US. Policies that help governments of developing nations to build effective, ethical systems for local adoptions – as well as for international adoptions when local placement is not an option – could increase international adoption. And improvements in the foster system – including more robust foster family recruitment and support – could further increase adoptions from foster care.

Certainly, there are many vulnerable children in the world who need not adoption, but caring mentors or foster parents, education or medical care, or broad supports for their struggling parents. But for the millions of children today in need of a family, nothing in the world can meet that need like adoption.

Read the full NCFA report, Adoption: By the Numbers.

Illustrating This Children's Book was Personal to Some

What "Dad Jokes" and Humility in Foster Care Have in Common