At a CAFO Summit a decade ago, an energetic guy in his 30s jumped up when the emcee asked for help tossing t-shirts to the cheering crowd. He was a blend of Olympian and celebrity as he ran up and down the aisles, heaving t-shirts up even to the balcony to laughter and cheers.

I met this energetic fellow later that day. His name was Jesse. We soon became fast friends, and have spent many a happy days together, from El Salvador to Guatemala, California to Pennsylvania.

Jesse spent the night with our family this week and gave me a signed copy of his newly-released book, JAR:  A Vessel in the Hands of the Potter.  It tells the true story of Jesse’s brutal childhood, his years in foster care, and aging into adulthood without a family. Yet somehow, amidst all the pain, Jesse points persistently upward to a loving Father in heaven and also forward to the many ways God would use the very hard things for good.

I won’t say any more about the book or the stories it contains. But I’ll include below the Forward I had the privilege of writing for Jesse. Every word in it is deeply heartfelt. My faith is indeed deeper and my heart fuller for knowing Jesse. I’m glad others now have that opportunity as well. 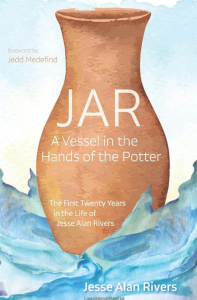 The most profound question in all the world takes just three letters to write:  W * H * Y?  That is not merely a question. It is the question.

Why? Why so much pain? Why such sorrow and loss? Why neglect and abuse? Why do we even exist at all?

The first twenty years of Jesse Rivers’ life carries more of these Why’s than one could count. The twists and turns of his stranger-than-fiction story include pain beyond what any child should bear.

Yet, marvelously, they do not lead merely to a crumpled, “Why?”

Rather, Jesse’s account makes a bold claim, one every bit as profound as that age-old question. No, this story does not attempt to solve every riddle or answer every objection. Nor does it pretend that tragedies are easily forgotten or that wounds don’t leave scars. Yet even so, Jesse’s claim is able to stand toe to toe with the question. It looks “Why?” in the eye without flinching.

Here is Jesse’s claim, woven through every twist of darkness and light in the pages ahead:

The place of our greatest hurt can become the place of God’s greatest work – first in us, and then through us.

To be sure, this is an audacious claim. It is worthless tinsel if said lightly. One could raise a thousand objections. Offered tritely to the suffering, it can feel like betrayal.

And yet… what Jesse presents is backed by good evidence for those willing to consider it. That includes the deepest truths of Scripture… the lives of faithful saints all throughout history… and, most of all, the Gospel itself.  Thanks to this book, it includes the remarkable account of Jesse Alan Rivers as well.

Yes, our world is profoundly broken, as Jesse recounts with heartbreaking honesty. Yes, the sorrow of the human soul is sometimes beyond description. But for those with eyes to see, God is yet at work. What others intended for evil, He can redeem. If this is so, pain is not only something we may endure. It is something that can, quite literally, be smelted by Love into unparalleled good.

That good is simply this – that we as beloved children steadily grow to become more like our good Father, dim but rising reflections of His fathomless peace and mirthful joy and self-giving love.

Having walked as friends with Jesse for a decade now, I’ve seen that firsthand. Certainly, Jesse would remind us that he is still growing, that healing is a lifelong process, and that none of us will ever be entirely whole until God makes all things new.

But every time we’re together, I find myself marveling at the man Jesse is today. Somehow, all that he experienced over so many years of mistreatment has not yielded what one would expect – rage or resentment or a lifeless soul. Rather, Jesse glows with bright eyes, a grateful heart, and an earnest desire to serve God and neighbor.

Years ago, Jesse and I spent a day exploring in Yosemite National Park. At every curve in the trail or bend in the river, he’d spot some new beauty, a fresh glory, to point out and rejoice in. The way the dark green of oak leaves contrasted with the gold of dry grass. The rainbow-blaze of a waterfall shot through with sunlight. Even a single flower or chirping bird.

As Jesse explained during our drive home, he saw in each beauty, large or small, an expression of “the 101 million ways God says, ‘I love you’ to each of us each day.”

For Jesse, this unbounded gratitude was not merely an attempt to “look on the bright side.” Rather, it was the fruit of eyes that have been baptized with hope. As Jesus might put it, Jesse has “eyes to see.” And so he lives with a heart of confidence that – even amidst many yet-unanswered questions of why? – a loving Father is at work for the good of His children, able to use even unspeakable hurt for unimaginable good, just as this book describes.

On that day in Yosemite, I quietly prayed that God would grow my eyes and heart to be more like Jesse’s. I’m still learning. But I sense God is indeed granting that request – little by little, in part simply as I get to spend time with Jesse and hear him share his story and all that he sees.

I’m so glad that you now have that privilege, too – getting to spend time with Jesse and hear him tell his story and what he sees. As you do, I trust that God will grow your eyes and heart to be more like Jesse’s as well.

Highs and Lows of a World Changer – The Founder of World Vision, Bob Pierce