When I was a kid, I was always fascinated by those pictures that looked like one thing until you realized that the negative space around the object actually formed something completely different.   There is the vase that upon closer inspection could be two faces . . . or the young woman that magically transforms into an old woman (or vice versa) in front of your eyes. 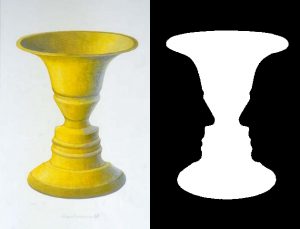 What looks like emptiness at first is sometimes just fullness of another kind.

We’ve all experienced this reality.  The day you lost that job ended up being one of the best days of your life.  The broken heart you thought you’d never get over eventually led you to a deeper and more meaningful relationship with someone else.  The empty box of Fruity Pebbles actually had a really cool temporary tattoo in the bottom.

Sometimes it’s clear like that:  I thought it was bad, but in fact, it is really, really good.

Then there is another category of experiences.  This is when our “negative space” experience is actually still negative and painful.  Yes, something beautiful grew out of it, but it still doesn’t make it all OK. That’s where most of us live.

Calli Crowder was placed in foster care at the age of 13 along with her three sisters.  Her mom removed her and her sisters from school to homeschool them and she was doing online school through a virtual academy.  However, someone at the school reported her mom for “educational neglect” and Calli and her sisters were subsequently removed and placed in foster care where they remained for the next six years.

Because of some inaccurate things in the case file, Calli’s foster parents were a little leary of Calli’s mom at first.  But over time, they realized that the committed, hard-working woman they were seeing was not the same person reflected in the case file.  They did everything they could to make her a part of the girls’ lives from inviting her over on holidays to making sure she knew when the girls had programs at school.  But despite what the girls and their foster parents knew about mom, each request at court for reunification was denied.

Then, when Calli was ready to go off to college and take advantage of the state’s college tuition program for aging out youth, the court finally granted reunification.  Calli still feels like this was done intentionally so that the state would not have to pay for her tuition. She remembers that day before going into court when she and her sisters met with their guardian ad litem who had been on their case for 6 years:

“And we went into the room where she was talking with us before we would meet the judge and our guardian ad litem looks at us and she asked ‘Which one of you is Calli?’ Our ages and our names are on a yellow McDonald’s napkin . . . at that moment I realized that we were just numbers in a system to her as well as to this court system . . . you’re making the biggest decision of our lives and you don’t know our names and you’ve had us for six years.”

Calli’s experience in foster care might best be described as “unjust”.  Calli and her sisters had amazing foster parents who are still “Grammie” and “Papa” to them.  However, the feeling that they should have never had to stay there that long cannot be shaken.  No amount of good coming out of this situation will ever negate that. However, Calli took this “negative space” of injustice and has filled it in with something else entirely.

She has worked as a paralegal in a law office and, upon graduation from college, she was chosen as a summer intern for the Congressional Coalition on Adoption Institute.  This is a program where foster care alumni work as interns in congressional offices and develop legislative proposals based on their experiences in care.  She hopes to someday attend law school. All of this is for the purpose of bringing justice where she found it lacking. She spends the best hours of her day everyday fighting on behalf of kids. Her “negative space” will likely always be recalled with pain, but she is clearly using it to create beauty for others.

And there is a great lesson in that for all of us.  What purpose can be found in our pain? How can the “negative space” in our lives be used for the benefit of others who come behind us?

Calli is showing us the way.

NOTE: An extended version of Calli’s story is featured in episode 14 of the Foster Movement Podcast. It’s available for download from iTunes, Google Play, Stitcher and Overcast.

A version of this article first appeared in CAFO’s regular Foster Movement column of the Fostering Families Today magazine (May/June 2019 issue).  To see a preview of the magazine and learn more about how you or your organization can subscribe to this great resource, click here.

Ferrets and Foster Care Advocates:  What Shall We Call Them?