The first time I saw her, she was sitting in the Orphan Sunday workshop at CAFO2018 in Dallas.  She caught my attention because of her long salt and pepper tresses, and the massive notebook in which she was taking copious notes.  I couldn’t resist meeting her, and this is how Eleanor Johnson came to join the Orphan and Stand Sunday volunteer Leadership Team as our Multicultural Ambassador.

This year, our team launched a new campaign called “ONE Child,” asking participating churches to choose one foster child to pray for on Orphan/Stand Sunday.  Eleanor humbly informed us that she had a bigger vision.  She wanted every child in foster care in Texas, (her home state), to be prayed for on Orphan & Stand Sunday.  As Texas is our largest state, this meant 31,000 children!

The first clue we had that perhaps she was not just kidding is that Eleanor acquired a list of the names and ages of every child in foster care in Texas…a list of 700 pages, double-sided! 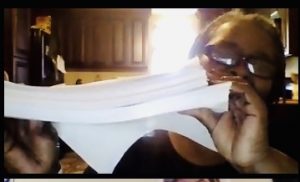 (Eleanor showing us the list during our virtual team meeting)

How could someone access such a list?  Eleanor has spent 36 years of her life serving as a child welfare professional in Texas.  She has devoted her life not only to her state’s most vulnerable children, but to building relationships at every level of government and in faith-based groups.   Eleanor told everyone she knew that she believed for each child in Texas to be prayed for on Orphan & Stand Sunday.  She shared this with Child Protective Services, CASA, the state’s eleven faith-based coordinators, and her friends in the judicial branch.  And soon, the list was in her hands.

So, when it came time to realize a God-sized vision of every child in Texas being prayed for, Eleanor felt confident that her network of relationships would step up. And she was right.

Eleanor spent three months assigning pages from her list to various groups and individuals.  The eleven faith-based liaisons of CPS distributed names of children on their caseloads.  Supervisors and workers took responsibility for assigning names of their caseloads.  All 72 programs of Texas CASA agreed to participate and assign names to churches.  CASA even set up a portal of the list to engage volunteers in the process and widen the net to reach churches that may not have been reached. 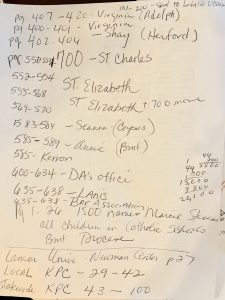 (A page from Eleanor’s notes)

Eleanor walked into the judge’s chambers and asked them, “What names do you want?” Judge Shelton in Jefferson county took 50 names for his church.  The Jefferson County District Attorney’s office took pages 600 – 634 of the list.  The County Bar Association took pages 635 – 638. When I asked Eleanor how she got these busy professionals to agree, she said, “When I worked in government, I would just love them, so now they love me back.”

Through the love of Christ shining through Eleanor, she personally assigned over 20,000 names, and others helped her assign the rest.

While this can be credited to Eleanor’s devotion, it can also be credited to the state of Texas committing over ten years ago to build transparency and trust between the state government and the faith community on behalf of foster children.  Eleanor told me: “Instead of going to churches and telling them what we needed, we began telling churches our situation, and asking how they would like to help. This changed everything.”  Texas also launched a “Clergy to the Courts” program, inviting leaders of faith to attend child welfare hearings.  The Texas Department of Protective and Regulatory Services (TDPRS) aligned itself closely with the Court Appointed Special Advocate program (CASA) and the faith community so that children had advocates in the courts, in the system, and in the church.  Fruit of this work can be seen in tangible numbers as Texas just announced that for the first time, more children are leaving foster care for safe, permanent homes than are entering the child welfare system, and adoptions surged past 6,000 for the first time in history.

And so that is how it happened that on November 10, 2019, in observance of Orphan Sunday and Stand Sunday, each and every one of the 31,000+ children in Texas foster care was prayed for as part of the ONE Child Campaign.

Faithful believers across Texas joined over 2,000 churches in the U.S. to pray for and serve vulnerable children.  It is a glorious thing to witness the people of God in unity for His children.  Never underestimate the impact that you, just one person, can have in this work.  Each of us has unique gifts to bring, and each of us like Eleanor can make a God-sized impact if we match our faith with His love. 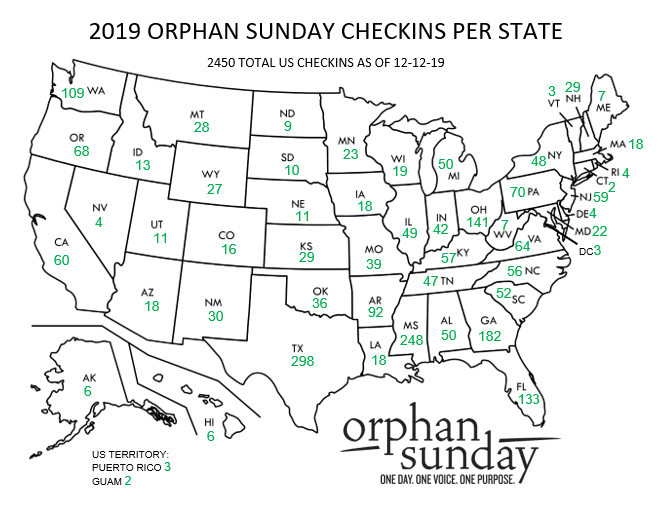 Soul Sisters - A Story of Impact